Skip to content
2 July 2022 BrexitCarnage Leave a comment
“In 2016, Johnson galvanized support for leaving the EU with a mendacious campaign that pledged, erroneously, that £350 billion ($425 billion) of money sent to Europe would come back into the Bank of England.
Johnson promised “sunlit uplands” for the green and pleasant land. But today the sceptered isle is more septic island. The freedom to work anywhere in the bloc — one now lost to Britons. The freedom of access to a market of half a billion people, now also lost to Britons.
For years Johnson, the disheveled political magus, was the golden boy of Britain’s Conservative Party. A favorite of comedy shows; the faux bumbling of Johnson delivered Brexit and a landslide general election win.
According to his sister, Rachel, a young Johnson said he wanted to be “world king.” As an adult he’s had to settle his ambitions at being Britain’s head of government. And he stopped at very little to achieve that aim.
But in June Johnson’s political crown slipped over face when his Conservative party was wiped out in two by-elections.
He has survived one vote within his party to unseat him. But may soon face another as Tory backbenchers are reportedly trying to change the rules — meaning he could be kicked out in another confidence vote inside 12 months.
These domestic travails may explain his passionate interest in Ukraine. But he’s studiously avoided any mention of the essence of its fight with Russia which is, deep down, Ukraine’s desire to join the European Union. 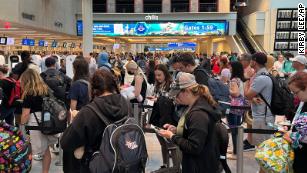 Why more air travel chaos is on its way
Meanwhile Britain is struggling with the near implosion of an airline industry facing cancellations of international flights and luggage mountains at Heathrow Airport. The legal system is in disarray as barristers over claims that their net earnings are below the UK’s minimum wage. Railway workers have staged walk outs and threatened more. Teachers too are on the verge of taking action as inflation surges ahead of wage increases.”
https://edition.cnn.com/2022/06/30/opinions/boris-johnson-ukraine-eu-brexit-kiley/index.html
Share the news